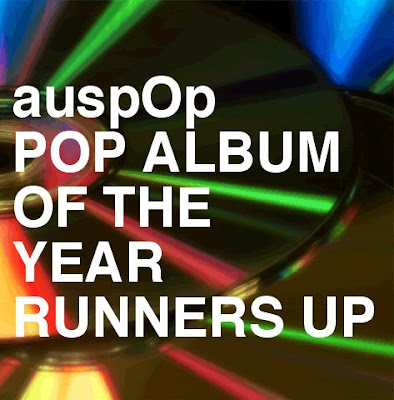 So we’ve applauded those albums that we feel were the five best and most exciting releases of 2008, but what of those that came so damned close? Well here are those that we felt most certainly deserved a mention due to their amazing impact on planet pOp in 2008; LADY GAGA : THE FAME We mentioned at the time that we believed the debut of Lady Gaga to be the emergence of a talent who’ll be around in years to come – so self-assured is the US pOpstar that she impressed everyone with her performances, her TV glasses, her lightning bolt make-up and sassy attitude when she visited earlier this year. Her live performances alongside The Pussycat Dolls in 2009 will be ones to watch. GIRLS ALOUD : OUT OF CONTROL This British female quintet continues to impress with their familiar blend of up-tempo pOp, and this, their fifth studio album, most certainly didn’t disappoint. They’re massive in their native UK, but why in the world hasn’t Australia been beguiled by their charms? Probably because their Aussie record label continues to ignore them. One only needs to see their live ‘Tangled Up’ tour DVD to see this is an enormous mistake. THE SATURDAYS : CHASING LIGHTS Launching on the back of their Girls Aloud tour support slot, this all new five piece, featuring more than one former S Club 8 star, impressed with deliciously catchy singles in ‘If This Is Love’ and ‘Up’. Their debut album too was polished pOp, though the choice for single No.3 still leaves us scratching our heads. Will they unleash album No.2 in 2009? Who knows, but let’s hope the future remains bright for The Saturdays. GOLDFRAPP : THE SEVENTH TREE Huge props must go to Alison Goldfrapp and co. for releasing one of the most delightful albums of 2008, one that grew on us with each and every listen. Who could forget the infectious single ‘Happiness’, or the gloriously understated ‘A&E’. Although the album wasn’t for everyone, particularly those who’d grown to love the electro leanings of their previous album ‘Supernature’. Truly sublime – and one we keep going back to. BRITNEY SPEARS : CIRCUS After shaving her head, dropping her kids and brandishing umbrellas at paparazzi snappers, Britney finally got her life back on track in 2008 and after doing so managed to bag herself a hit record in the process. Though Britney clearly had not much to do with the disc (writing/producing etc all done thanks to outsiders), it was a polished pOp record that spawned two top ten hits. Let’s hope she can keep the momentum going in 2009. JESSICA MAUBOY : BEEN WAITING Got to hand it to Ms Mauboy – she’s managed to shake off the ‘Young Diva’ tag in 2008 by roping in rap superstar Flo Rida for her debut solo effort. It narrowly missed the No.1 position, while her second single ‘Burn’ is Rihanna-esque pOp that would be a sure-fire No.1 if it was from the Barbadian singer. There are some other pOp gems on this album and it’s so polished and international in it’s sound, if you listened to it without knowing who it was belting out the tracks, you’d swear it was from the US. Only the Cyndi cover version make us groan. THE PRESETS : APOCALYPSO Winners of the ARIA Awards for the best dance release, best group and album of the year, The Presets showed the world that we Aussies could do dance/pOp as well, if not better, than the rest of the world. And the world took notice. Singles ‘My People’, ‘Talk Like That’ and the phenomenal ‘This Boy’s In Love’ were truly a sign that The Presets’ time has most definitely arrived. KATE MILLER-HEIDKE : CURIOUSER Little Miss Kate has always been a little ‘Curiouser’, if not downright potty at times, but her latest album was a delightful cornucopia of varied pOp ditties laced with Kate’s trademark lyrical honesty. ‘Can’t Shake It’ was an awesome up-tempo taster of what to expect, ‘Caught In The Crowd’ is sweet, raw and divine and don’t even get us started on the desperately good artwork. HOLLIE SMITH : LONG PLAYER We’re so damned glad we discovered this album by New Zealand’s first sister of soul Hollie Smith – it is indeed a revelation. Hollie’s soulful vocals left us completely spellbound as she purred over first single ‘Philosophy’, and we basked in the warmth created by the album’s ten sublime offerings. If you’re a fan of pure, out and out soul music, get behind Ms Hollie Smith – she’s utterly divine. KEANE : PERFECT SYMMETRY Big props to Tom and the lads from Keane for their stellar new album ‘Perfect Symmetry’. Like all good bands these days, they offered first single ‘Spiralling’ as a free download from their website, following it up with ‘The Lovers Are Losing’ and the title track as subsequent singles. But they deserve kudos for experimenting with their sound in an age where most bands just get hopelessly bogged down recreating the one sound that made them big in the first place. WILL YOUNG : LET IT GO ‘Let It Go’ was a much more honest and mature offering from the former Idol superstar – it brought us the classic ballad ‘Changes’ and followed up in early December with second single ‘Grace’. The album was also rather personal, dealing with the breakdown of Will’s long term relationship. The album hit the No.2 position on the UK charts, but single No.1 JUST scraped into the top ten. Whether there’s a third single from the album is yet to be determined, but we’ll keep on supporting Willy pOp in 2009.