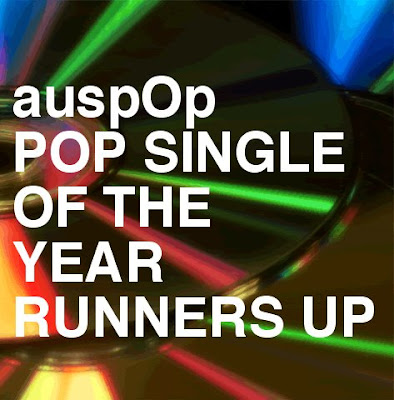 Well we’ve given you the run-down of those albums we think made the cut in 2008, firstly with our top five albums countdown and then earlier this evening with the albums that just missed out. Over the past five days, we’ve also had our top five singles of 2008, culminating in our number one earlier today. But which other singles do we think rated a mention in 2008? There are a few of them, so let’s go through them one by one; THE KILLERS : HUMAN Let’s get one thing straight right here and now. We think that Mister Brandon Flowers is a bloody marvellous pOp genius, and when he and his band teamed up with Madonna’s ex-producer, the results were truly staggering. A shame then that commercial radio in Australia failed to see the bigger picture and all but ignored ‘Human’. We have no idea what “are we human or are we dancer” means either, but the song is sheer brilliance. ADELE : CHASING PAVEMENTS British soul singer Adele was responsible for the first truly great single of 2008 when she released this, her debut single in January. It was a massive hit in her native UK, and found chart success right throughout Europe. When it came to Australia though, again she was ignored, the single peaking on our ARIA charts at No.56. Shame really, because this is about as raw and honest a pOp song as you’re ever likely to get. Simply divine. ALPHABEAT : FASCINATIONHere’s another track that was released early on this year overseas and failed to make an impact locally – Alphabeat’s fun-filled, hands-in-the-air, cheesy-pOp, sing-a-long track ‘Fascination’ became an instant classic, hitting the top ten in the UK on it’s release in February, six months after it’s release in the band’s native Denmark. Pure unadulterated pOp music that makes you feel good – but once again ignored by a local radio all too focussed on what’s happening in the US. TAKE THAT : GREATEST DAY Are you starting to see a pattern emerging here? Four truly amazing pOp songs, all but completely ignored by the 2Days and Novas of the world and it’s unfortunate that those two networks have such audience share ’cause they certainly ain’t giving us what WE want! pOp is back, and the sooner they wake up to it, the better. Take ‘Take That’ for example – The fastest selling album of the 21st century in the UK, but has local radio touched this monster European hit? Have they bugger! BRITNEY SPEARS : WOMANIZER A heck of a lot was riding on this release – and everything had to be just right. Thankfully, everything was just right, from the song, to the lyrics, to the video clip, the artwork for the single and much more. Britney showed that she was still sexy and sassy and could still belt out a number (albeit with the help of a vocoder). That said, we’ll be watching closely in 2009 to make sure she doesn’t fall off the rails again. CYNDI LAUPER : INTO THE NIGHTLIFE Cyndi Lauper – disco diva. Didn’t quite sit right with us, but after ordering the album in from Japan in May, we instantly connected with this song. It was edgy, punchy and oh-so-now in it’s sound, but as radio locally is not known to take chances, they put her in the too hard basket (the Nova network deserves a pat on the back for at least giving this a go). A shame though that Sony Australia still hasn’t released the remixes digitally. The fans are still after them! KYLIE MINOGUE : THE ONE The greatest Kylie single that never was. This never had a chance. Passed up by Parlophone for a physical release in the UK, passed up by EMI in Germany and even passed up by our own Mushroom/Warner Music in Australia, the Freemasons remix of ‘The One’ in both single and club guises was without down one of the most glorious Kylie club anthems in the history of Kylie club anthems. It is completely criminal that a physical single of this was never released. EMPIRE OF THE SUN : WALKING ON A DREAM It’s been on the charts for months and has been spreading it’s wings internationally, especially in the UK where they actually GET it. Already on rotation on some UK radio stations, EMI UK was so excited by this project that they are rush releasing the album in February. One of the cleverest pieces of Australian pOp music in recent years, the video clip alone is worth the price of admission. Let’s hope the UK comes to their senses and puts an enhanced video on the single. GABRIELLA CILMI : SWEET ABOUT ME It was a particularly big year for young Melburnian Gabriella Cilmi, with this single hitting No.1 down under and bumping itself into top tens the world over. The song in itself was so powerful that blinded by it’s success, ARIA voting panellists decided that the album must be good too – good enough to vote for continually throughout this year’s awards. She picked up six gongs, including ‘Single Of The Year’ for this. BRYN CHRISTOPHER : SMILIN’ One of this year’s best newcomers, Bryn Christopher’s second single was co-written by one of our own in former Idol star Ricki Lee Coulter. It was penned during the UK writing trip for her album ‘Brand New Day’, but she felt it was too dark to make the final cut. Handballed to Bryn and with new lyrics added, he made it his own. A sublime and classy piece of pOp, which Ricki says just might make it to her next album. JENNIFER HUDSON : SPOTLIGHT Former American Idol star Jennifer Hudson may end up remembering 2008 for some very different and very tragic reasons, but it was another year of great professional success for the former Oscar winner. Her debut single ‘Spotlight’ was written by US r&b star Ne-Yo and was a glorious mid-tempo stomper that lyrically dealt with a jealous partner. It was the perfect introduction to Jennifer the recording artist. KATY PERRY : I KISSED A GIRL Whether you love or loathe Katy Perry, you can’t deny that this single was without doubt the most talked about of the year. It was insanely catchy, was a little bit naughty, and went on to sell more than two and a half million copies in the US alone. It went to No.1 in practically every single country throughout the world, even topping charts in Israel. Not so much a chart hit, but a global phenomenon – and we were taking notice. ROISIN MURPHY : YOU KNOW ME BETTER Without a shadow of a doubt one of the kookiest people in pOp, Ms Murphy had us dancing in the aisles during her Aussie tour earlier this year and after the pOp brilliance of ‘Overpowered’ and ‘Let Me Know’ in 2007 came single No.3 from her ‘Overpowered’ set, ‘You Know Me Better’. Catchier than hayfever in springtime, ‘You Know Me Better’ continued Roisin’s record of producing some of the classiest pOp music on the planet. Apparently, we won’t have to wait long for solo album No.3 – it’s reportedly already in production. SAM SPARRO : 21ST CENTURY LIFE Mister Sparro might have scored our pOp single of the year with his breakthrough hit ‘Black And Gold’, but the follow-up single ’21st Century Life’ also deserves a mention for it’s pure, out and out pOp goodness. It was ’80s inspired, up-tempo sparkly pOp perfection and ought to have also been a big hit – if it hadn’t been for the fact it’s predecessor just wouldn’t go away.