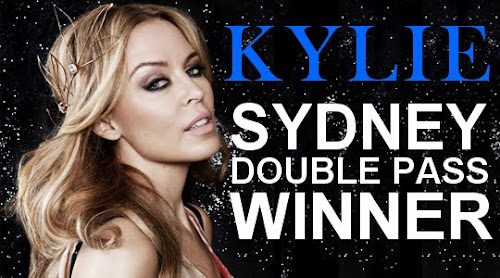 Unless you’ve been hiding under a rock for the past week or so, you’ll know by now that Miss Kylie Minogue is on Australian soil right now with her ‘Aphrodite – Les Folies’ tour, which kicked off in Brisbane on Friday night.
As you’re probably also aware, here at auspOp we were fortunate enough to be given three gold double passes to give away to the concerts – one double in each of Sydney, Melbourne and Brisbane – with big big thanks to the gorgeous teams at Warner Music and Frontier Touring.
We drew the winner of the Brisbane double pass last week. We’ll be drawing Melbourne’s double pass winner out this Sunday, but for now we’re here to announce the winner of the double pass to the Sydney show this Saturday night.

So congratulations on this occasion go to;

Congratulations Angela! You’ve picked up a gold double pass to Kylie’s Sydney concert this Saturday night!
And thankyou to everyone who entered this draw (and gosh, weren’t there a lot of you).
Don’t forget, we’ve currently got a double pass to see Kylie in Melbourne still to go – AND we’re giving away copies of her new Tour Edition of ‘Aphrodite’, with thanks to Warner Music. Check the sidebar (over on the right) for the giveaway link!