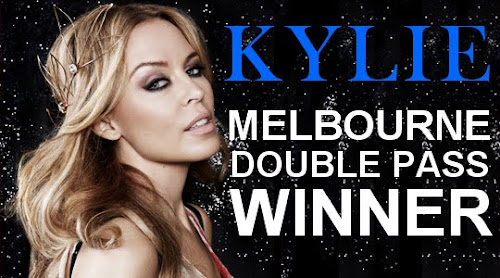 Well this is it pop kids – the last of our Kylie Minogue double passes being given away as we speak.
Drawn earlier tonight, we can now reveal the lucky Melburnian who’ll be heading along this Thursday night to see the Princess Of Pop live at the city’s Rod Laver Arena.
As with the competitions for the Sydney and Brisbane double passes, we were flooded with entries for this one, so the race to the finish line was always going to be a tight one.
But it has been run and it indeed has been won, so congratulations go to;

James from Ascot Vale in Victoria!

Congratulations James! An email is waiting for you in your inbox now confirming your win and letting you know how we’ll be getting the tickets to you!
And as with all our Kylie ticket giveaways, a massive thankyou obviously to all who entered, but also to the teams at Warner Music and Frontier Touring who made it all possible!